Smallpox was a global disease that killed millions of people all over the word.


In 1953,  a Russian minister from the former Soviet Union, Professor Viktor Zhadnov proposed to the World Health Organization, that wealthy countries should band together and fund a global initiative to eradicate Smallpox. This involves vaccinating the entire world. Since many countries did not have the money or the means to implement an effective vaccination program, he argued that rich countries should pitch in and fund this initiative. At this time, the  USA has effectively vaccinated the entire country and they had no case of smallpox.  Initially,  the USA  rejected the idea as they felt that there was no need for the USA to be funding a global vaccination program.  However with persistence from Professor Zhadnov ,  and the election of President Lyndon Johnston,  USA took a  lead in the  global vaccination intuitive.  The US was the largest contributor to  this vaccination program.  By 1972, smallpox was effectively eliminated from the world.  My generation ( born between 1970 to 1978) were the last humans to come out with the scar of the smallpox vaccine.


This is an example of what a global initiative can do to the world.


Public health investments are long term, they benefit both the rich and poor although it is hard to understand the idea. For example, on the surface, our smallpox story seems like a good Samaritan initiative, perhaps appear as a socialistic idea. However,  as it turned out, the smallpox eradication initiative was the  most financially successful health intervention in the history.


How come such an idea that sounds so socialistic turns out to  be a financial success?


Even though smallpox was nonexistence in the USA in 1960s, there was still a considerable  cost burden to the government, as  it still existed in many parts of the world. So the USA and other developed countries had to maintain a large stock pile of smallpox vaccine as well they had to vaccinate new born children.  The Center for Disease Control ( CDC) later on calculated the financial impact of this global vaccination initiative , i.e., the cost  of the global vaccination program against potential savings in not having an annual smallpox vaccination program .  The CDC reports that funding the global vaccination program  was the best financial outcome for the USA.   To quote the CDC: “ the largest donor, the USA , saves the total of all its contributions  every 26 days, making smallpox prevention through vaccination one of the most cost-beneficial health intervention”


If I can put in a business sense. You invest  $x on a process improvement initiative in your manufacturing company, and you save $x dollar every 26 days. Isn’t that a brilliant financial decision?


Investment in public health is sometime hard to understand as these benefits are long term. Sometime, doing the right thing for ethical /moral reasons, will turn out to be financially sound over a long period of time.


Unfortunately, we are living in a hyper nationalist word, where there is no long term vision  to lead any global initiative.


Imagine  the same scenario happening now. The suggestion of using tax payers money to vaccinate poor countries will be a political suicide. Right wing news  media  will call out any politician who suggest this as a Marxist socialist , living in an utopian dream, not to mention the level of conspiracy theories that will  be propagated.
It is important to realize that no nation can live in a bubble. Pathogens don't respect national boundaries.
Posted by Swamy Kujarananda at 2:35 PM No comments:

The WhatsApp Cow - the era of (mis)information

﻿
﻿﻿ When the Indian government announced the demonetization scheme, I was scratching my head . Why would  the government remove Rs 1000 and replace them with Rs 2000 which makes it even more easier to hoard black money? At that point, a new information surfaced in Facebook and WhatsApp. Apparently, the new notes are provided with a Microchip technology that will allow the government to track the notes. Like with most FB/WhatsApp information (or misinformation) , it ended with a patriotic note and praises for the Prime Minister!  A quick google search took me straight to the RBI web site which categorically denied the presence of any chips. You can probably buy potato chips with the new note, but that is about it.  ﻿﻿

I posted this back in my FB page. By the time, most of my friends have already shared the fake information and moved on to sharing a photo of a Ganapthy that will bring good luck.


Myth #2: When the opposition parties (as well people with some common sense) started asking more questions regarding the demonetization, the next fake news emerged. Now the new notes seem to include some secret technology. If you swipe your phone over the Rs 2000 note, a message from Prime Minister Modi will pop up warning Pakistan. (and with a usual note “please share this to everyone who criticize our beloved PM, Jai Hind, we will defeat Pakistan”). After a few digging, it turns out that someone has written an App. You download the app, open the app and scan the new Rs 2000 note which bring out an old speech from Prime Minster Modi. It was  hard for me to explain  to my relative that it is all in the app - nothing to do with the currency note. I can write an app to bring out an old speech of the PM if you scan a photo of a cow. The currency notes do not carry any secret message.

Myth #3: Then we got into the issue of the government spending nearly 1 billion dollars on two statues – one for Sardar Vallabai Patel and the other one for the Marathi King – Shivaji. People started asking questions as to why the government should spend nearly Rs2600 Crores on a statue for a dictator king when there are so many other critical projects that need money. Then, the following message surfaced on Whattsup and Facebook
The statue is made of Amorphous Silicon, Cadmium Telluride & Copper Indium Gallium Selenide. This is exactly the same material used to make solar cells. Our government consulted with Dr. Immonen Kirsi, Senior Solar Scientist at VTT Research, Finland to develop technology to mould these materials into a statue form. This research took 2.5 years & on December 3rd, Dr. Kirsi sent a private email to Modi Sir that it’s now ready for mainstream use. The statue will generate enough electricty to power all government offices in Mumbai. The statue also has Radial Uniform Projection And Ranging(RUPAR) technology to track boats in the Arabian Sea to prevent a repeat of the 2008 Mumbai attack where the terrorists entered India through the sea. RUPAR is the next generation of SONAR technology and has been developed at the Indian Institute of Science.
This one is a little hard to debunk, because it is peppered with a lot of scientific jargon that my country men would rather skip. Interestingly, I found out that  there is a such thing as Copper Indium Gallium Selenide. Other than that, the core message is just not true. Dr. Immonen Kirsi is also real. There is a profile in Linkedin and he appear to be an academic in a Finland university.  The poor guy probably doesn’t know that his name is used for propaganda purpose.  The thing that gives out is this Radial Uniform Projection And Ranging(RUPAR). My response is “What the f””K is this?”. I can’t find any information on this so called RUPAR technology. Also no evidence to suggest the IISc has developed one. Why would anyone employ a Sonar technology on a statue? Sonar is generally used under water to detect submarines. The statue generating power? Very novel, why not make it produce rain in draught areas and stop flood? Shivaji has the power!
Myth #4: The last one is the icing on the Cake.
We ask – why protect the holy cow when other animals are allowed to be slaughtered? Why not extend that sympathy to the goat, chicken, etc.? In fact, it is legal to slaughter Water Buffalo which is a close relative to the holy mother Cow? (genetically probably the same, except for the skin colour).
Here is a response from a BJP minister. The holy cow is different. It breaths in CO2 and breaths out Oxygen. Plus, range of health benefits the BJP minister outlines for the Cow Dung and urine. 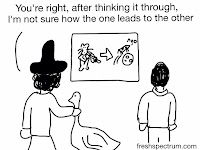 Really? And my countrymen will forward this junk in  FB and WhatsApp?

I am sorry to disappoint you, my Cow loving Hindu brethren. All mammals, including our Holy mother cows, breath-in oxygen. That is why we have lungs. Even aquatic species like fish needs oxygen to survive- that is the fuel for animal life.  Unless somehow, my cow loving Hindus have magically transformed the holy cow to a hybrid Mammal -Plant, there is no chance in hell that Cows will breath out Oxygen. They will start to fly, talk and stand in elections before that.

What do you know? Our PM has a secret project with the scientists in Indian Institute of science, backed by Professor Heleknki who specialises in genetic modification of animals using Quantum Induced Magnetic Positron Anodization   Sterilization System ( QIMPASS).  The plan will be to transform the cows to breath out Oxygen as well generate electricity. In addition, the cows will also send inter-continental ballistic missiles to shoot down any nuclear misses from Pakistan in Mid air, and sniff out black money from people. This the reason why we must protect Holy mother Cow.  It is all written in our Vedas by our holy Rishis.  Please forward this message to all people. Jai Hind, Baratha Mathe ki Jai!!

P.S: For the sake of our holy mother cow, please don’t forward the above message – no matter how patriotic it sounds, no matter how much proud you feel about India and our beloved PM. Please don’t share crap. Take a minute, breath out the patriotism that is clouding your intellect for a few minutes. Stop forwarding/sharing, then resume your new found Patriotic fever.


Posted by Swamy Kujarananda at 12:48 PM No comments:

Swamy Kujarananda
I am an Engineer by profession. Spritual and Anit-guru advice is my part time job!